Geographically, Bulgaria is a country located in Southeast Europe, bordered by Serbia, North Macedonia, Greece, Turkey, and Romania. The dominant climate is moderately continental and sub-Mediterranean which results in an exquisitely fertile land in the northern region but also rivers and forests in the mountainous region.

Bulgarian cuisine is an authentic and interesting gastronomic field although it reflects the impact of the Turkish, Greek as well as some Slavic, Mediterranean, and oriental cuisines that entered Bulgarian kitchen through a number of events in history.

Food of Bulgaria is based on a wide array of traditional, very simple, aromatic, and delicious dishes that can satisfy the taste of almost any foodie. The secret of this simple yet special type of Balkan cuisine is in the natural, organic, and fresh ingredients that for centuries have been attained from the fertile fields, gardens, orchards, and pastures.

The dishes are based on high-quality vegetables that are highly exported such as tomatoes, zucchini, paprika, cucumbers, carrots, onions, beans, peas as well as barley, wheat, rye, corn, and rice. The fruit is consumed fresh but it is also preserved in delicious marmalades, preserves, syrups, and jellies.

In contrast to the cuisines in the rest of the Balkan countries, Bulgarians use meat least in their dishes, so many of the food preparations include vegetarian or vegan versions.

Meal serving relies on three courses that always start with fresh salad and a shot of alcoholic aperitif, Bulgarians are real gourmands who managed to oppose Western influence when it comes to food and are still faithful to their traditional way of eating so the food is basically prepared according to recipes that their great-grandmothers used to follow.

Upon your visit to this picturesque country, don’t forget to take this list of popular foods that you simply must try!

Sharena sol is the most popular Bulgarian spice that has been used in Bulgarian cuisine since ancient times. The ingredients in sharena sol are salt, summer savory, dried fenugreek leaves, cumin, thyme and basil.

There’s hardly any Bulgarian household that doesn’t keep a jar of this spice in the cupboard since its uses are multiple- you can add it to baked potatoes or vegetables mix but, in general, sharena sol (translated as salt in many colors) is not a spice to add to stews, soups or similar food preparations that usually require spices.

In fact. it is most consumed on a piece of bread spread with butter or some other spread or on sprinkled on top of fries or a portion of white Balkan cheese.

Oshav is a super-light, yet tasty fruit dish that is traditionally served on Christmas Eve. Basically, it is a combination of stewed dried fruit such as pears, prunes and apples, though some variants include apricot and figs. The dried fruits are first washed then put in a pot with water and cooked until they soften.

When the mixture becomes soft, honey or brown sugar is added as well as spices such as vanilla, cinnamon, and cloves to add flavor. The oshav is always prepared the night before the Christmas dinner because it is served and tastes best cold.

This pie is one of the best traditional Bulgarian comfort foods. Banitsa is a pie with cheese whose dough is made with phyllo layers that are buttered and then covered with a batter of eggs, cheese (feta or any white Balkan cheese) and yogurt.

Banitsa is a very popular street food as well and one can find it and buy it anywhere in Vulgaria including grocery stores and kiosks. Some variants of this pastry are made with minced meat, spinach or apples and raisins as a sweet variant.

The banitsa can be eaten warm or cold and it is a great breakfast option accompanied by a glass of yogurt.

Sirene po Shopski is a dish that originated in Sofia though its name “shopski” refers to the people known as “Shopi” who live near the capital. If you’ve never heard of Sirene po Shopski, you probably have heard of the Shopska salad whose origin is rooted in the same place [1].

This dish is a mezze food that is served in any traditional or modern Bulgarian restaurant. Sirene po Shopski is a piece of thick white Sheep or cow cheese which is combined with layers of tomatoes in a clay pot called “guyveche”, then seasoned with black pepper, parsley and oil and baked with an egg on top. It is a very nutritious meal that although is mainly served as an appetizer, it can be an excellent light lunch or brunch during hot summer days with a piece of white homemade bread on the side.

Kyopolou is a vegetable spread that is popular not only in Bulgaria but also in Turkey, Serbia and North Macedonia, though some of its versions can be also found under the name “pindjur”.

Kyopolu is made of roasted eggplants, garlic, red and green peppers, tomatoes and onions. After the roasting, the vegetables are mashed and then seasoned with salt and oil. Some versions also include ground walnuts.

The kyopolu is best when served cold and it can be consumed either as a spread on bread or other basic savory pastry with some cheese on top or as a condiment with a shot of cold aperitif and grilled meat on the side. The popularity of this dish is so high that it is prepared in large quantities in the fall and then stored in jars in order to be consumed all year long.

Tikvenik is a sweet pastry that is one of the staple sweet pies when it comes to traditional Bulgarian food. It is made of thin layers of phyllo dough covered with grated pumpkin, chopped walnuts, sugar, vanilla, and cinnamon.

The texture of tikevnik is quite similar to the one of the banitsa which may be considered the savory variant of this pastry. After being filled, the phyllo layers are rolled and then baked. When cooled, they are dusted with powdered sugar. Tikvenik is mainly made and served during the fall and winter when it is a much-favored breakfast option and a convenient light comfort food.

Kiselo mlyako is the Bulgarian yogurt that, according to some gastronomic theories, is one of the first types of yogurt and one of the oldest worldwide. It is made of cow, sheep or goat milk and no additives are added except two natural types of probiotics Streptococcus thermophilus and Lactobacillus subsp.bulgaricus which was discovered by a Bulgarian microbiologist.

This dairy product has an exquisitely high status due to its probiotic properties but also due to its creaminess and nutritional value. Kiselo mlyako is also present in the Albanian, North Macedonian, and Serbian cuisines and just like in Bulgaria, it is used as an ingredient, a complement to savory pastries or as a condiment.

This sweet bread is a traditional Slavic sweet bread that can be found on festive tables during Easter or Christmas holidays in every Balkan country, just under a slightly different name and possibly made in a different variant. Though it looks like a loaf of bread, it is similar to “brioche” and often considered a dessert pastry or a hearty cake.

Kozunak is made with flour sugar, cocoa. milk, eggs, nuts, and raisins. It is served when cooled after baking and it is also a great breakfast choice, usually combined with a cup of warm tea, coffee, or a glass of milk or cocoa.

Taleshko vareno is a typical classic when it comes to food in Bulgaria. This traditional stew is made of beef and vegetables and it is cooked for a decent amount of time since the beef cuts are usually tougher. Onions, carrots, celery and potatoes are added and usually cut only in half or whole in order to withstand the cooking time. When it comes to seasoning, Taleshko vareno contains spices such as peppercorns, cloves and beef. This dish is most often served in the winter as a main dish with a slice of rustic homemade bread on the side.

Another classic Bulgarian dish that originates from the city of Chipran- a region that produces an abundance of delicious vegetables which, as you may have guessed, are present in this dish. Kjufteta po chipranski is a dish that is basically meatballs soaked in a tasty tomato sauce. The meatballs are made of beef or pork ground meat and onions, eggs, salt, pepper and flour are added.

The tomato sauce, on the other hand, is made of tomatoes, paprika, parsley, garlic, onions, and celery. The spices used are according to the preference of the chef who makes them and it is believed that different homes in Chipran use different authentic combinations of spices and herbs.

The name of the Snezhanka Salad refers to the white color and it can actually be translated as Snow White Salad. It is an excellent appetizer in the hot summer months as it contains cooling ingredients such as cucumbers, yogurt, garlic, oil, and dill. Some versions of the Snezhanka salad include parsley, ground walnuts, or roasted peppers.

Apart from being served as an appetizer, this salad can also be used as a side dish, a dip, or as mezze food with flatbread or pita bread on the side.

Katino meze is a traditional food from Bulgaria whose name refers to its main use- mezze food. Katino meze is made of veal and pork chops that are fried with onions, leek and red paprika. Then, this mixture is baked or stewed in a clay pot with sliced mushrooms and covered with white wine. Although it is mezze food, it can be quite fat-dense and satiable so alcoholic drinks are recommended as the best match to will neutralize the caloric weight.

Bob chorba is a bean stew that is cooked with Bulgarian type of kidney and white beans and vegetables such as onions, tomatoes, carrots, peppers and mint. Some versions include chunks of dry pork meat (mostly in winter), potatoes and red paprika.

Bob chorba is on the menu of the other Balkan countries who have adapted the recipe under their terms. However, the convenient thing about this soup is that it can be made in both meat and vegan version as it is simple yet tasty and convenient for any season.

The famous Torta Garash is a real treat for every chocoholic. It is made of moisty walnut sponge cake layers covered with a generous amount of dark chocolate. Next, the cake is covered with a deliciously creamy chocolate ganache and chopped or sliced nuts according to preference are added on top as decoration.

Torta Garash got its name from Kosta Garash who was an Austro-Hungarian confectioner working in Ruse, Bulgaria where he served this cake that soon spread throughout the country, so today you may find this cake on the dessert list of many restaurants and patisseries.

Kurabiiki are cookies that are actually a variant of the cookies known as “gurabiya” that originate from the Middle East. These cookies are made of flour, butter, sugar, egg yolks and honey.

They are shaped in a round shape and are covered with confectioners sugar before being baked. Kurabiiki stay tasty and crunchy for some time if kept in a jar and they are mainly served and enjoyed during festive occasions or holidays.

It may sound like the popular burek pie but don’t let the name fool you! Chushki burek is a Bulgarian dish made of red peppers that are roasted and filled with a batter made of eggs, white cheese, parsley, and then coated in flour, eggs and breadcrumbs before being deep-fried in oil until crispy and golden. This dish is usually served as a starter with a glass of wine or a yogurt dip on the side. 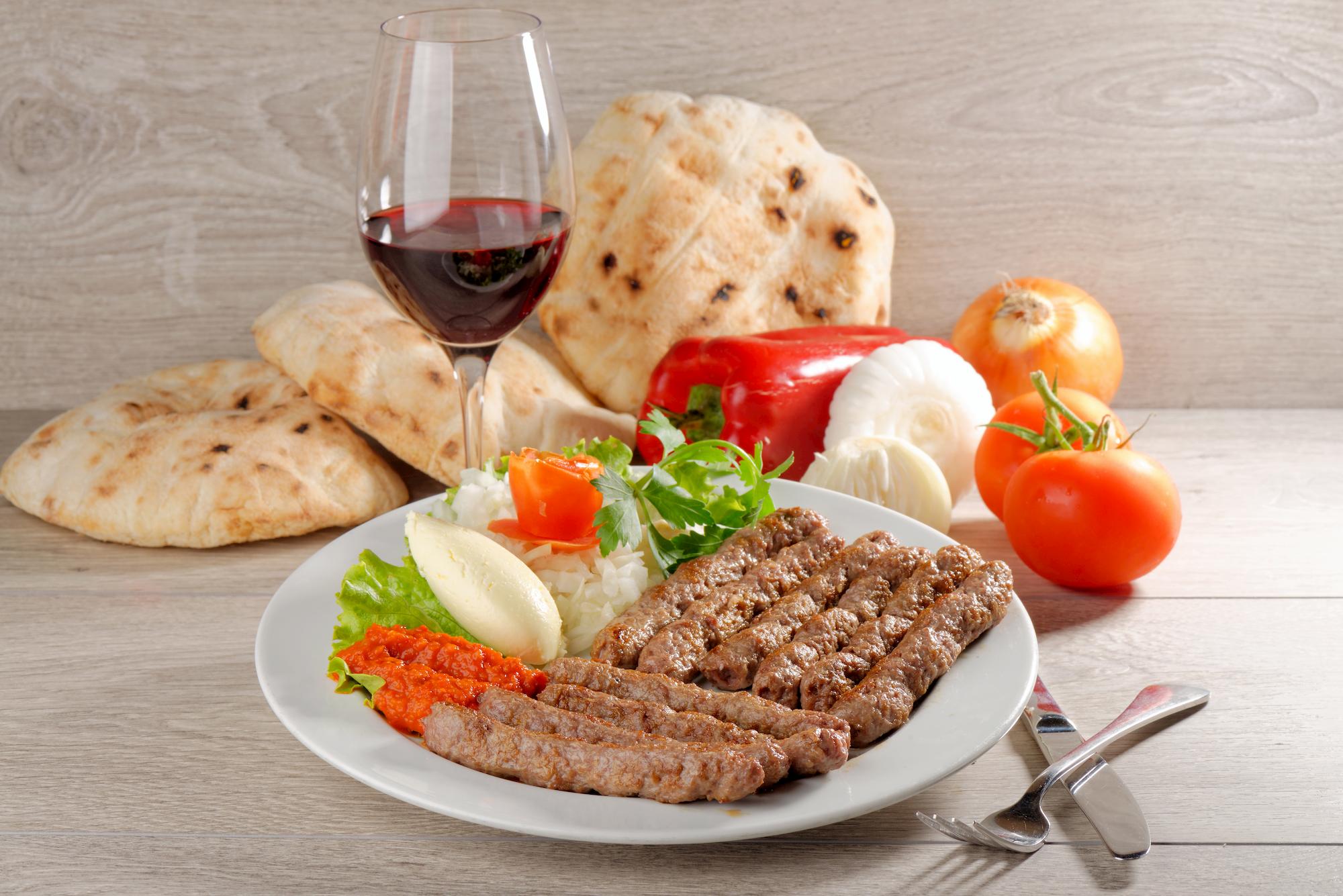