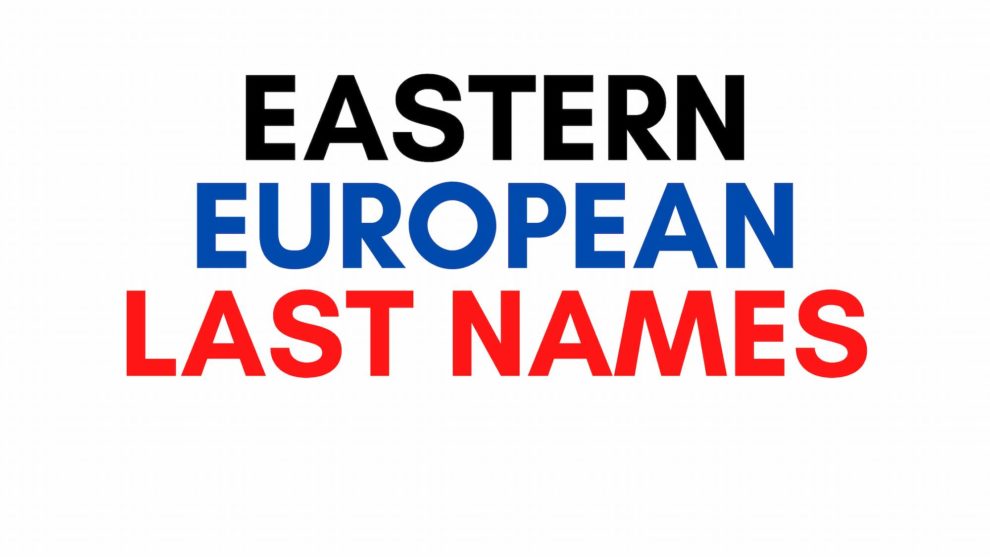 Names tell the story of origin. Last names are meant to be descriptive and they contain family history as well as other characteristics that are meant to broaden our identity.

Here we have a list of the most common surnames among the European citizens living in the east part of the continent. Some of them are common in different ethnic groups and others are highly authentic and are not that important outside the values of a particular nation.

Ivanov has a first name as its core. It is derived from Ivan which is a typical Slavic name given in a Christian community. In Christianity, there is another version of this name – John (referring to St. John).

Ivanoŭ is a Belorusian version of it, while Ivanov is a Bulgarian one. These are the most common surnames in Belourusia and Bulgaria.

The suffixes –oŭ and –ov make those last names patronyms. Therefore, their full interpretation would be “a son of Ivan”.

Patronym is a surname that refers to a family patron and is the most used formula in terms of family name construction across cultures.

Read: Are Bulgarians Slavs, Tatars or Something Else?

Similar to the Russian Kozlov, this typical Slavic last name is derived from the word Koza (a goat). There are variants of the same root in almost all languages across Europe.

This version is common for Belarus, but modifications of this surname are common across all Slavic ethnic groups. For example, Kozlovski in North Macedonia, Kozlovic In Serbia, and Kozar in Croatia.

It is also a surname that indicates the main occupation: families with this kind of surname are expected to have a lot of goats and live as goatherds.

Using economic circumstances for forming family names is also used when it comes to the creation of surnames.

This last name is given through its family occupation and is an indicator of the economic position of the family in society.

It is based upon the word Kravets (a noun of Polish origin) that means a tailor. This last name is quite frequent in Russia and Ukraine.

There is an occupational surname with the same semantic root in Hungary- Szabó. It’s slightly different in form because of the differences in the Hungarian language [1].

Surnames based upon this principle are formed all across Europe, and their origin dates back to the Greeks. By connecting the last names with their profession, it became normal for the son to continue the job of his father.

This way, the labor division in society is controlled and made predictable. Examples of this principle are quite often found in Hungary, Germany, Slovakia and among the Czech.

Historically, there is an important family of Scottish-Russian origin with the name Kravtsovs of Orenburg. Those who follow sports will recognize this surname because of  Vitali Kravtsov who is an ice hockey player of Russian origin.

This is probably the most frequent last name among the Slavs.

There are four variations of this name (Novak, Nowak, Novotny, and Novoselac). They all have the same root in the Slavic term Nov which stands for “new”.

This surname was often given to families that recently came to live in a particular region. This was done for the purposes of distinguishing this family from the natives.

Novik is one of the most common surnames in Belarus. Also, while Novak is the Croatian modality, Nowak is mostly found among the Poles.

Novotny is the Czech variant of this surname.

Some famous folks with these and related surnames are the Austria-born mathematician Martin Andreas Nowak, the famous actor Martin Novotny and the Croatian ex-footballer Martin Novoselac.

Georgieve is the most common among the Bulgarian last names. It is also very common in North Macedonia, Montenegro and Serbia.

It is a patronym that means the namesake is a descendant of an old ancestor named Georgi. A name derived from the old Greek language in the form Georgios.

The suffix -ev means that this surname is to be interpreted as “the son of Georg”.

In Serbia, there is a famous person and songwriter named Vlado Georgiev.

Almost everything about Georgiev can be applied to Dimitrov too.

It is a patronym that has Dimitar as the first name of the ancestor. Dimitar is a common first name among the Slavs of Greek origin.

There is a town called Dimitrovgrad in Serbia, originally called Caribrod.

Its present name dates back to Yugoslavia, when Georgi Dimitrov (a Bulgarian communist leader) was popular.

This man proclaimed a union between Bulgaria and SFRY, an idea that was rejected by Joseph Stalin. This led to a major split in the diplomatic relations between Yugoslavia and the Soviet Union.

This is the second most popular in the Czech Republic, after Novak. Svoboda means a freeholder. It has the same expression as Svoboda – the term which stands for peace.

Popov is one of the most common last names in Russia. It is also frequent among other European countries such as Bulgaria, North Macedonia and Serbia.

It’s one of the so-called occupational surnames, This last name suggests that some of the old family ancestors were priests.

Pop is a man who serves the church. This word has Greek origin, where papas refer to a father. Pope is a chief pastor of the worldwide Catholic Church.

It is the fourth most common last name among the Czechs [2].

The only exception may be the Croatian surname Dvronik. It’s the surname of a famous Croatian singer, songwriter and showman Dino Dvornik.

It refers to a servant or an official of a manorial estate or royal court.

Černý is among the most frequent last names in Czech Republic. This last name is also common in some other Central-European countries like Slovakia (Čierny) or Poland (Czarni).

Crno in most Slavic languages refers to the color black. Therefore, you will often see those names given to someone with dark skin, dark eyes or dark hair.

11. Kowalski (or Kováč and Kavalioŭ)

This common East European last name has a similar function as the surname Smith in English-speaking countries.

Kowal, Kavalioŭ or Kováč all refers to a blacksmith, in Poland, Belarus and in the Croatian language.

It is a popular last name among other Slavic ethnic groups as well. The variant found in Slovakia and among a number of families in Hungary has the form Kovács.

It is also very frequent among the movie characters, with the most famous being Stanley Kowalski (played by Marlon Brando) from the 1951 masterpiece A Streetcar named Desire.

It is the third most common family name among the Poles, This last name is also popular in Slovakia and is often found among the last names of the Hungarian people.

It has the Slavic word Visnja as the core theme which makes it quite beautiful, It means a cherry tree, and it can be interpreted as “the one from the town of the cherry”.

The most popular showman with this surname is the Polish pop-singer and vocalist Michał Wiśniewski.

Kamiński is a frequent last name among the people of Poland. It is meant to be one of those surnames that refers to a place.

However, there are exceptions. For example, when it comes to the last name Kamiński, there are more than 60 towns named after Kamien. It is a Polish noun that stands for stone.

In Bulgaria, there is a common name Sterjo with a similar meaning.

I hope you’ve enjoyed this article. The number of interesting last names is huge in Europe. Eastern Europe is not an exception, with many old and original names.

These were the most popular names but you can conduct your own research and try to find even more interesting ones and tell us all about it in the comment section.