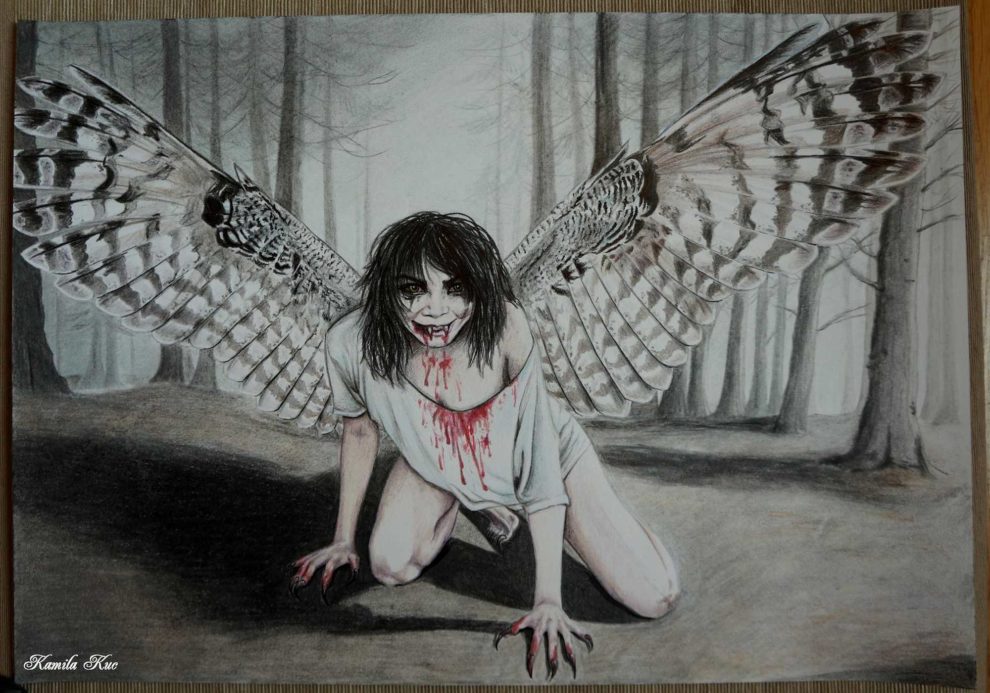 If we hear someone talking about a nasty Slavic demon that drinks blood and lurks in the night, vampires would probably be the first thing that comes to our minds.

However, Polish culture hides a story about Strzyga (alternative spelling: Striga) a demon quite similar to vampires but in many ways nastier.

Unlike vampires, Stzyga is a female demon and has two lines of teeth. During the night, she turns into an owl and hunts down anyone unlucky enough to be outside.

In this article, you will read about Strzyga’s dark story and learn how to protect yourself if, by any chance, you run into her on some gloomy night in the Polish countryside.

Strzyga is an eerie creature, often with bird and owl-like features. It has big claws and is merciless in nature. Barns, woods, and crossroads are her favorite places to be during the night.

During the day, she prefers to stay at abandoned houses, where she performs house chores.

However, her origins aren’t in Polish mythology. She has been hunting people down long before Slavs came to central and southern parts of Europe.

Ancient Greeks and Romans have been writing down stories about a malevolent monster named strigoi or strix long before Slavs.

How Does Strzyga Come Into Being?

According to Slavic mythology, every Striga was initially a human being. The word had it that people who were born with two sets of teeth, with no hair in their armpits, and with a unibrow or some kind of a birthmark on their back were the ones to turn into Strzyga after they die [1].

Allegedly, these people were also born with two hearts and two souls. The word goes, once a person dies (usually at a young age), one of her two hearts stops beating. The other one lives on and gives life to her second, demonic nature.

Unless properly treated, the corpse of such a person would come back to life in a demonic form and rise from the grave as a very angry and bloodthirsty Strzyga.

This ancient Slavic folklore story also says that Strzyga remembers her human life. Therefore, she will start hunting those who mocked her or somehow hurt her in her human life.

She will not only drink their blood and suck their life energy but also eat their insides. After she finishes her enemies, she would drink the blood of children or anyone traveling at night (yikes).

In order for her demonic body to survive, she needs to hunt humans constantly. She can also drink animal blood, but this would keep her satisfied only for a while.

There was also a male counterpart of this demon in Slavic mythology, named Strzygoń. In Polish folklore, he is portrayed as a cunning and dangerous monster. You want this creature as far away as possible from human settlements [2].

How To Protect Yourself From Strzyga?

Since she comes into being from a corpse of a deceased person, protecting the community from her means destroying the body. Therefore, it is necessary to either burn the body, decapitate it, cut the leg tendons or damage it in some similar way, and prevent its revival.

Another way to stop this monster from haunting the land of the living is to find someone brave enough to sleep in the grave of the deceased person who is now believed to be Striga. If that happens in the dawn, she will die for the second time and finally be at peace.

Strzyga on the Big Screen

Unless your grandma is from the Polish countryside, you probably heard of this creature by watching The Witcher or reading the book series of the same name by Andrzej Sapkowski.

Striga is depicted as a creature consumed with hate towards all humans. Unlike the one from Polish folklore, her demonic form doesn’t resemble a bird. She looks more like a fierce primate, with long red hair. She comes out to hunt only during the full moon.

The only way to vanquish her is to prevent her from coming back to her grave in the dawn. If she can’t go back, the daylight will kill her [3].

In ancient Slav communities, there was hardly any medicine or scientific knowledge about the body, which is why every anomaly was frightening. It was seen as a curse and a sign of supernatural powers.

The myth of Striga wasn’t there only to scare children and prevent us from wandering around at nighttime. Its purpose was to remind the community that people with anomalies deserve kindness just like everyone else.

Strzyga still haunts our imagination to this very day. She managed to move from mythology to movie screens. While constantly winning new cultures and media, she remains one of the most fearsome demons known in Slavic mythology.